Notes from a Holocaust Survivor (Reflection)

The tour guide gave us identification cards to read as we traveled through the Holocaust Museum exhibits. The ID card shared information of one person who endured the horrific experience, and at the end, we learned if “our” person died in or survived the holocaust.

It turned out that “my lady,” Susan Taube, lived. In addition, she honored our group with a live talk before we went through the exhibits. With as little commentary as possible, I want to share some statements I noted as she spoke. They struck me and I hope they impact your thinking in some way. 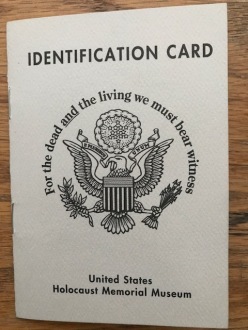 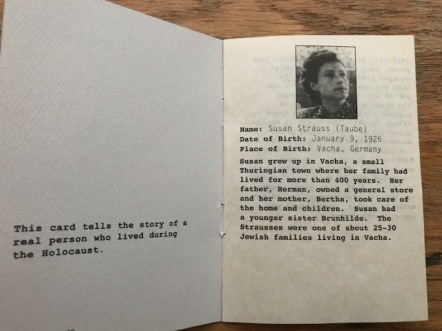 Inside cover and first page of ID card. Photo taken with my camera.

Susan Taube was born in 1926 in Germany, in a city where her family lived for 500 years before the holocaust. Separated from her family, Susan never saw her mother, grandmother, and sister again. She later reunited with her father, which was a rocky time at first, and then they grew closer after a time apart.

The following are her introductory statements.

“You can take with you what you can carry.”

“They introduced us to a way of life we had to accept.”

“You never saw the people again if they got sick.”

“We were liberated, but we couldn’t go anyplace.”

“It wasn’t easy to come to America back then; you needed someone to vouch for you.”

From this point, please note that I recorded statements from the context of a larger discussion about her family, specific experience, forgiveness process, current state of mind, etc. Most noteworthy are the parallel realities some of the following statements suggest (see a * before these statements).

“If she [Susan’s sister] was not registered [after Jews resettled], I don’t know what happened.”

*“It was an open secret.” [on the holocaust happening under the people’s noses]

“From bad to good, it’s no problem.” [on moving to the United States]

“Look, you survived. It took a while to adjust, but from bad to good, it doesn’t take long. You adjust…When I learned what happened to my family, yes it was tough, but you adjust.”

“I’m a survivor. If I don’t volunteer, who will?” [In answer to a question about why she volunteered at the Museum]

*“The Russians suffered a lot… they lost families too.”

*“The policy was the policy, but.. you still had neighbors and friends.” [On life in the transition… Jews were able to retain some existing relationships offline]

“Even under these circumstances, you had good people. Otherwise, people would not have survived.”

“The general policy was to get rid of us, any way you can.”

“When they found dead horses, they gave us the meat.” [I don’t know why, but something about hearing Susan say this went through me.]

I offer no “meaning” or “definition” for you. I think Susan’s words speak independent of my comments. Please, pick out one or two and meditate today. Let Susan’s words bring shape to your thoughts about not just persecution, but anything relevant in your life.